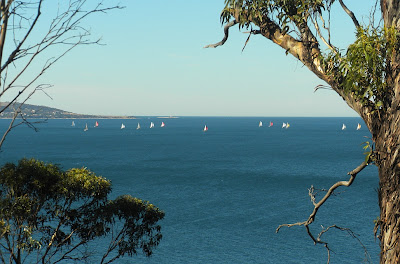 Cities can be inexplicable— even though spots feel comfortable or even ideal— travelling across them one feels that something’s amiss. The remedy is to find out why they germinated there in the first place and check if that’s reflected in the current whole, amidst the gigantic population and urbanisation booms that engulfed the seed. Hobart seems ambiguous until you notice that it was once probably like Portwenn on Doc Martin (‘Elingham’, http://www.itv.com/docmartin/ )— a small, seaside fishing village. The whale-blubber boiling pots on Salamanca wharf (for oil) and the nearby shops advertising fish are clues. And now? Battery Point, a quaint living fossil, has kept most of its older buildings, some now plush and others student share houses— once a dockyard residential area, now tourist honey. What of the kilometres of the other suburbs and thousands of hectares of bitumen connecting them? Don’t dwell too long there though as its explanation and prognosis is unsavoury— instead see why Hobart is unique in Australia— the river Derwent still flows and the sea water still goes in and out, and the sea remains close to Hobart.

For most people the constant toil of 19th century life has been replaced with an intangible connection between work and reward: the rigorous physical strains have mostly been replaced with neural hyperactivity (although some workers displace that too, with ‘music’ piped into their skulls or by relying totally on documented procedures), and there arises a by-product called leisure time, to rest those brains and to occasionally experience a little hedonistic freedom.  It’s not a closed-system anymore though— there is an energy leak: the cream of modern toil is sapped via share trading (financial trading)— and with even government departments being changed into such leaky systems, leisure time becomes an ever-more important escape. 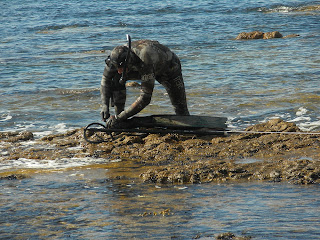 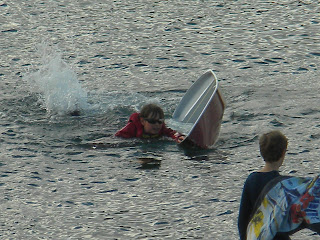 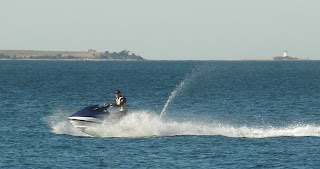 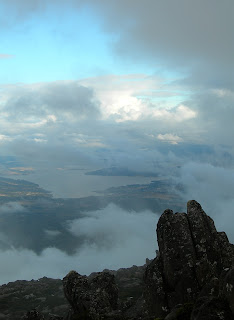 The Derwent River drains from the full range of human activity, from the near-absence of humans in the snowy heights, through what was probably amongst the world’s most heavily forested valleys in modern times, mostly converted to paper now but with remnants reserved (http://nla.gov.au/nla.news-article23668307 , http://nla.gov.au/nla.news-article25555201 http://dx.doi.org/10.1080/11263504.2011.638332 ), down through hop farms (Oast houses for beer), a swan’s brackish haven in upstream Hobart, past Cadbury’s chocolate factory, the Entertainment Centre for Tasmanauts staging such bands as the Eurythmics, from city bridges and out to sea, being ~5km wide at the mouth. 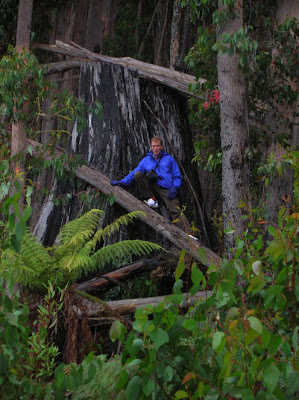 The sides of the Derwent are a welcome breather from normal city life (as are the wider, northern beaches of Adelaide, but in Taswith the dunes replaced by the sequence of typically Australian-southeast-coast bays and cliffs). 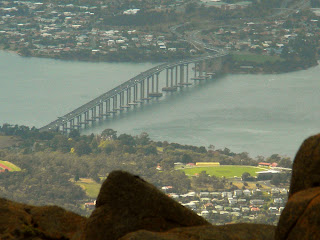 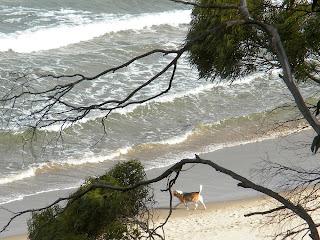 On Kingston Beach I was enjoying a warmish, early winter, walking on the dog-free side of the ‘dog-beach’ (where one mingles with a range of surprisingly dog-like creatures) and noticed an older than average somewhat heavy-built lady with rolled up trousers behaving oddly— continually staring at her feet in the water, her dogs trustingly watched from the shore and were trying to experience the reason they’d gone there in the first place. She said she’d lost her prescription glasses in the water and they had blue frames. Neither dogs nor fish were helping. I searched for a little while and considered that the good side of the event was that some fish might be able see better that evening. I wandered with the current to one side a little and suddenly their sparkling dark blue with pink splashes was unmistakably an unnatural object by my feet— the frames matched her blouse— she seemed happy and said thank you, nearly forgot her doggie bag and leash then went on playing with the dogs in the water as she had been doing beforehand, looking like the glasses would get washed again. 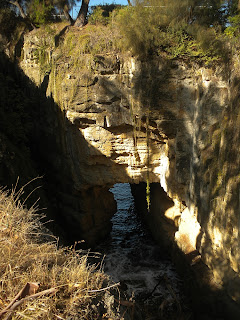 The local children are quite adapted to the Derwent and make the most of it. At the top of a ‘blowhole’ (where the waves have undercut the cliff but left the top edge as a bridge), at the next bay down— Blackman’s Bay, I heard some boys swearing down below but on going all around the fenced top of the hole I couldn’t see them down there, though still wondered if they had fallen in and were trapped or were just playing. I looked for the long way around to the sea-level entrance, along the cliff base and was giving up but two teenage girls were heading comfortably in that direction. They said it led to the blowhole. I wouldn’t have gone that way but they seemed to fit in the channels of the wall and made it look easy. If they could do it then surely I could too? (even though my back doesn’t bend as much?) and I decided to be intrepid (Bear Grylls eat your heart out http://www.angusrobertson.com.au/by/bear-grylls/ )— and made my way along successfully. Children were enjoying their time diving into the seaward chasm by the blowhole entrance. Some said the water was warm but those having climbed out didn’t look warm. I was able to return back, although the tide had risen and I only just made it up the ledges— the local children must know their own route to scramble back. 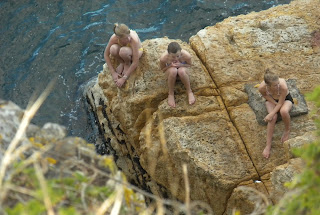 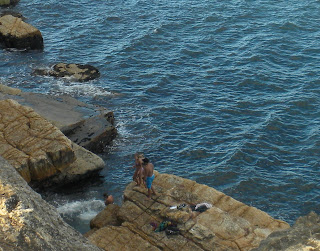 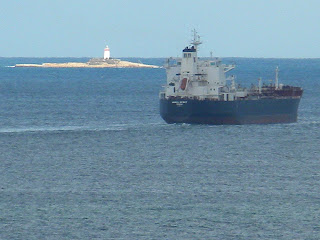 The mouth of the Derwent looks like the biggest escape of all, in Hobart, but it has human usage too: the slow gateway to the rest of the world, the Sydney-to-Hobart Christmas yacht race enters, and cargo ships and the scientific expedition vessels to the colder south pass to and fro.

And a lively array of sealife still feeds in the lower Derwent.